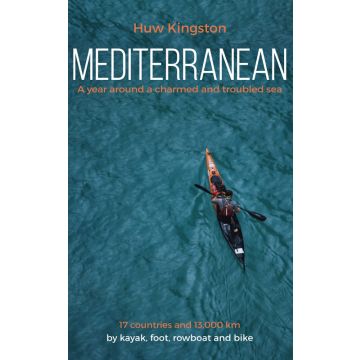 incl. VAT
deliverable
delivery in 2 to 5 days
Add to Wish List
Tags
Andalucía Espana Spain Italia Italy lombardia Venetien Mittelmeer Africa maroc Albania Friuli-Venezia Giulia France greece Dolomiti südalpen Italienische Alpen Französische Alpen Westalpen Crna Gora turkey Türkiye Croatia hrvatska dalmacija Tre Cime di Lavaredo Monte Carlo Westliches Mittelmeer Algeria ANZAC Huw Kingston al-Ḥammāmāt
A year around a charmed and troubled sea 17 countries and 13,000 km by kayak, foot, rowboat and bike British-Australian adventurer and environmentalist Huw Kingston’s account of his remarkable year-long circumnavigation of the Mediterranean Sea Tells of the people and places of the Mediterranean countries of Europe and North Africa Combines adventure travel and physical endurance with human stories and the celebration of friendship 978-184995-274-3 240 × 170mm 224 pages liberally illustrated with photos and maps, colour throughout Softback On 26th April 2014 Huw kayaked away from Anzac Cove at Gallipoli, Turkey, taking the next three months to navigate around the coasts of Greece, Albania, Montenegro, Bosnia, and Croatia. Following this, he spent three months walking the full length of the European Alps, taking on Mont Blanc, at 4810m Europe’s highest mountain, in the process. Having left the Alps behind, he biked through Southern France and across Spain before paddling his sea kayak along the coast of Andalucia to Gibraltar and across the Straits of Gibraltar, between the Pillars of Hercules, to North Africa. This was a major achievement, a full traverse of Europe in eight months; 7,500 km from Turkey. However, for Huw, this was only the half-way point. During winter, the coldest and stormiest for many years, Huw continued the journey by bike through Morocco, Algeria and into Tunisia. The ever-worsening situation in the region forced him to abandon his bike in favour of an alternative mode of transport. A wonderful set of coincidences and circumstances saw Huw use an ocean rowboat to row, by night and day, the 1,500 km to Turkey with a young Slovenian adventurer. It was the first time he had ever rowed in his life. For the final month Huw kayaked the last 1,000 km to where it all began along a Turkish coast now awash with the flotsam and jetsam of the worst refugee crisis in Europe since World War II. After 363 days Huw arrived back to Gallipoli, in time for the centenary commemoration of Anzac Day. His incredible journey included many memorable events such as being held on a Turkish military island after inadvertently landing to camp, meeting an amazing one-legged hiker while crossing the Alps and arriving dog-tired and starving by kayak to Africa after local kindnesses beat back British and Spanish political differences over Gibraltar to allow a crossing of the Straits of Gibraltar. Huw took in the extraordinary land and seascapes, the rich and varied cultures and peoples and the current state of many of those countries. This is a fascinating story of endurance, and throughout this epic journey Huw raised funds for the children of war-torn Syria, in the process becoming Save the Children Australia’s highest-ever individual fundraiser.