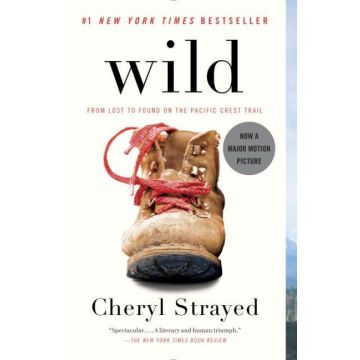 No. 1 NATIONAL BESTSELLERNOW A MAJOR MOTION PICTUREAt twenty-two, Cheryl Strayed thought she had lost everything. In the wake of her mother's death, her family scattered and her own marriage was soon destroyed. Four years later, with nothing more to lose, she made the most impulsive decision of her life. With no experience or training, driven only by blind will, she would hike more than a thousand miles of the Pacific Crest Trail from the Mojave Desert through California and Oregon to Washington State-and she would do it alone. Told with suspense and style, sparkling with warmth and humor, Wild powerfully captures the terrors and pleasures of one young woman forging ahead against all odds on a journey that maddened, strengthened, and ultimately healed her.One of the Best Books of the Year: NPR, The Boston Globe , Entertainment Weekly, Vogue, St. Louis Dispatch

[toggle title_open="Rezension zuklappen" title_closed="Rezension" hide="yes" border="yes" style="default" ]"Spectacular. . . . A literary and human triumph." - The New York Times Book Review"I was on the edge of my seat. . . . It is just a wild ride of a read . . . stimulating, thought-provoking, soul-enhancing." - Oprah Winfrey, on Wild , first selection of her Book Club 2.0"Strayed's language is so vivid, sharp and compelling that you feel the heat of the desert, the frigid ice of the High Sierra, and the breathtaking power of one remarkable woman finding her way - and herself - one brave step at a time." - People (4 stars)"An addictive, gorgeous book that not only entertains, but leaves us the better for having read it. . . . Strayed is a formidable talent." - The Boston Globe"One of the most original, heartbreaking, and beautiful American memoirs in years. . . . Awe-inspiring." - NPR Books"Cinematic. . . . A rich, riveting story. . . . Our verdict: A." - Entertainment Weekly"Pretty much obliterated me. I was reduced, during the book's final third, to puddle-eyed cretinism. . . . As loose and sexy and dark as an early Lucinda Williams song. It's got a punk spirit and makes an earthy and American sound. . . . The cumulative welling up I experienced during Wild was partly a response to that too infrequent sight: that of a writer finding her voice, and sustaining it, right in front of your eyes." - Dwight Garner, The New York Times"Brave seems like the right word to sum up this woman and her book. . . . Strayed's journey is exceptional." - San Francisco Chronicle"One of the best books I've read in the last five or ten years. . . . Wild is angry, brave, sad, self-knowing, redemptive, raw, compelling, and brilliantly written, and I think it's destined to be loved by a lot of people, men and women, for a very long time." - Nick Hornby"Devastating and glorious. . . . By laying bare a great unspoken truth of adulthood - that many things in life don't turn out the way you want them to, and that you can and must live through them anyway - Wild feels real in many ways that many books about 'finding oneself' . . . do not." - Slate"Incisive and telling. . . . [Strayed] has the ineffable gift every writer longs for of saying exactly what she means in lines that are both succinct and poetic. . . . an inborn talent for articulating angst and the gratefulness that comes when we overcome it." - The Washington Post"Vivid, touching and ultimately inspiring account of a life unraveling and of the journey that put it back together." - The Wall Street Journal"Strayed . . . catalogs her epic hike . . . with a raw emotional power that makes the book difficult to put down. . . . In walking, and finally, years later, in writing, Strayed finds her way again. And her path is as dazzlingly beautiful as it is tragic." - Los Angeles Times"A fearless story, told in honest prose that is wildly lyrical as often as it is dirtily physical." - Minneapolis Star Tribune"This isn't Cinderella in hiking boots, it's a woman coming out of heartbreak, darkness and bad decisions with a clear view of where she has been. . . . There are adventures and characters aplenty, from heartwarming to dangerous, but Strayed resists the temptation to overplay or sweeten such moments. Her pacing is impeccable as she captures her impressive journey." - The Seattle Times"Strayed's journey was at least as transcendent as it was turbulent. She faced down hunger, thirst, injury, fatigue, boredom, loss, bad weather, and wild animals. Yet she also reached new levels of joy, accomplishment, courage, peace, and found extraordinary companionship." - The Christian Science Monitor"Strayed writes a crisp scene; her sentences hum with energy. She can describe a trail-parched yearning for Snapple like no writer I know. . . . It becomes impossible not to root for her." - The Plain Dealer"Brilliant. . . . Cheryl Strayed emerges from her grief-stricken journey as a practitioner of a rare and vital vocation. She has become an intrepid cart[/toggle]