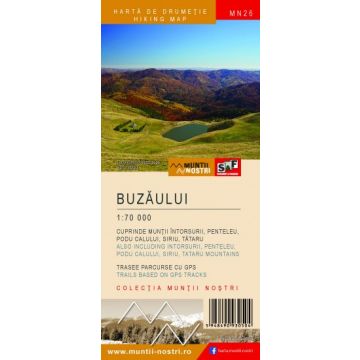 incl. VAT
deliverable
Delivery in 2 to 5 days
Add to Wish List
Tags
Map Hiking Wandern Wanderkarte Romania karpaten karpaty Carpa?ii Orientali Harta de Drume?ie
The Buzau Mountains consist of several massifs: Intorsurii Mountains, Mount Tataru, Mount Siriu, Podu Calului, and Penteleu. They are bordered to the north by Sfantu Gheorghe and Raul Negru depressions, the Vrancea Mountains through Chiurcus creek, and Comandau Depression; to the east by the Vrancea Mountains through Basca Mica Valley; to the south-east and south by the hills of the Curvature Subcarpathians; to the west by the Grohotis Mountains through Teleajen Valley, the Ciucas Mountains through Telejenel Valley and Buzau Valley, and Piatra Mare Mountains through Tarliung Valley. From a geological point of view, the Buzau Mountains are made up of sandy shales, sandstones, clay shales. They are not very high mountains and the slopes are gentle. The highest peaks are: Pilisca Peak 1,222 m (Intorsurii Mountains), Tataru Mare Peak 1,476 m (Mount Tataru), Malaia Peak 1,662 m (Mount Siriu), Podu Calului 1,439 m (Mount Podu Calului), and Penteleu Peak 1,771 m (Mount Penteleu). The most extensive nature reserves in the Buzau Mountains are: Milea - Viforata Nature Reserve, Ruginosu Peat Bog and the Yew Forest. There are also other tourist attractions: Vulturilor Lake, Casoca Waterfall, fortress ruins in the area of Bicfalau village, the Heroes Cemetery in Tabla Butii Pass and the remains of the caste of the Teutonic Knights –Kreuzburg-. The map of Buzau Mountains (MN26) is the 26th map of the new Muntii Nostri collection. The map was edited using the latest mapping techniques and it was printed on moisture resistant paper. It is easy to read and simple to use due to the mapping styles, specific to Schubert & Franzke company, and as a result of practical information structuring. It is handy and everything is exactly where it should be. The map is useful for both hiking enthusiasts and professionals. All the trails have been recorded in the field using a GPS. They are described in detail in both Romanian and English. Each trail has a technical box containing with necessary information. The map also contains the UTM grid, a projected coordinate metric system useful in the quick measurement of distances on the map. The application created for iOS and Android will dissipate the nostalgic aura of the map, giving the product the technical complexity required for this century. Enjoy this map up on the sunny peaks of Buzau Mountains, scrutinizing the horizon for the neighboring peaks, which will soon give the names of the following maps of Muntii Nostri hiking map collection.
Publisher:
Schubert & Franzke & Muntii Nostri
Series:
Colec?ia Mun?ii No?tri
Scale:
1:70000
Product Type:
Maps
Language:
English, Romanian
EAN:
5948490930504
Year of publication:
2021
Continent: Europe
Country: Romania
Region: Ostkarpaten
Categories: Outdoor, Hiking Maps Europe, Hiking Maps, Wanderkarten Karpaten, Wanderkarten Rumänien